skip to main | skip to sidebar

Sturm , Twang, and Sauerkraut Cowboys -- article in The Western Way

The Western Way magazine has published a much shorter version of the lengthy essay/paper on European country music that I wrote with the aid of my Guggenheim Fellowship and NEH grant, and presented at the International Country Music Conference in Nashville last year (and in other venues).
A full version of the essay, with pictures, can be viewed by clicking HERE. 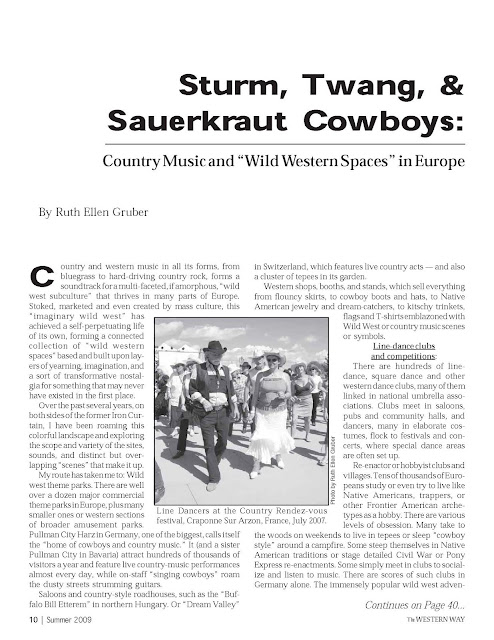 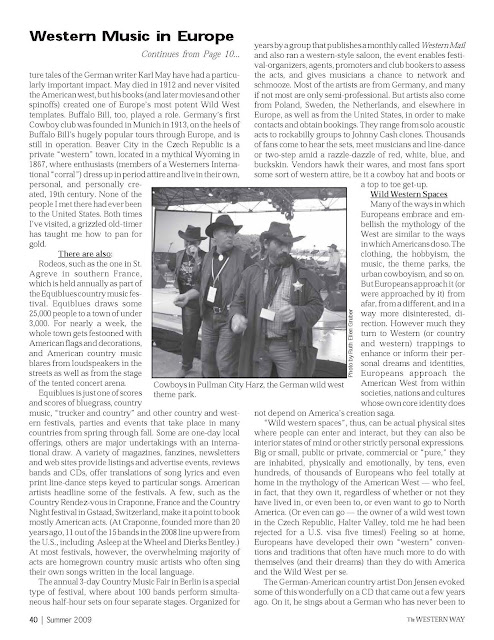 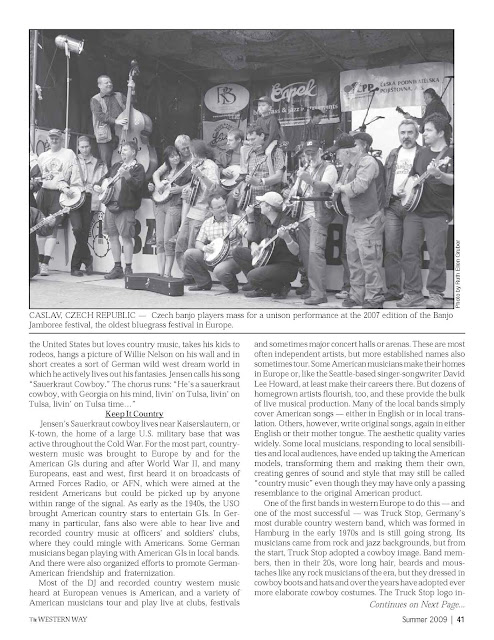 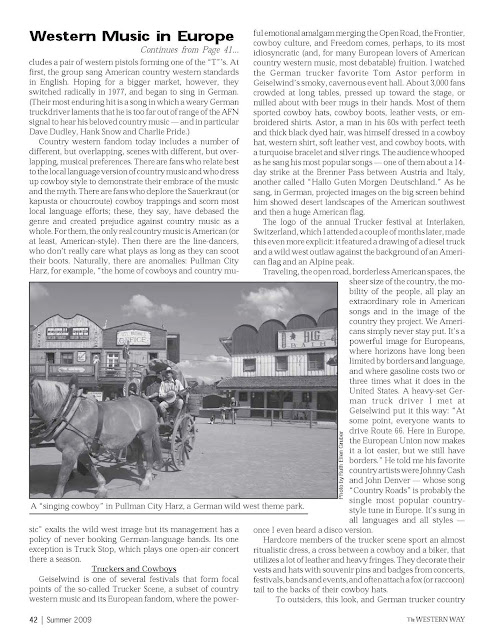 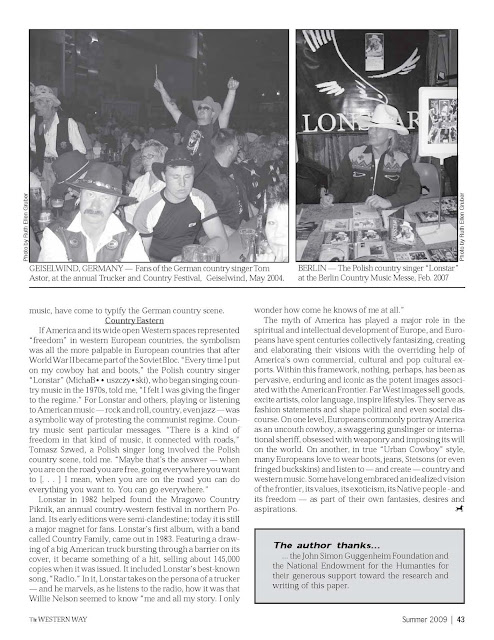 Posted by Ruth at 5:02 AM No comments: Links to this post 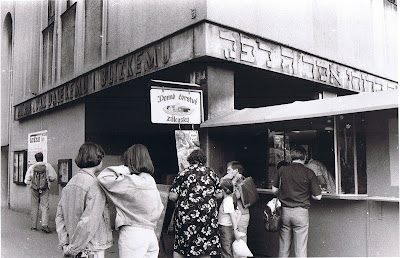 Here's my latest Ruthless Cosmopolitan column, on looking back to the Way It Was before the Wall came down....

ROME (JTA) -- The English author L.P. Hartley once wrote that "The past is a foreign country: They do things differently there."

That's how I feel whenever I look back at the way that the world -- in particular, the Jewish world in Central and Eastern Europe -- worked before the collapse of communism 20 years ago.

The changes triggered when the Berlin Wall came down have, of course, produced a host of new and complex challenges that Jews in Europe have had to confront.

But as Robert Djerassi, a leader of the Bulgarian Jewish community, put it recently, "When I think back to Socialist days, even everyday experiences sound so improbable and grotesque that it's hard sometimes to convince people who didn't live through them that they actually took place."

I lived and worked as a journalist in communist countries from the late 1970s onward, first as a correspondent for United Press International and then as an independent reporter, for JTA and others, as well as the author of several books on the region.

It was in the late 1980s that I began dedicating much of my writing to Jewish subjects, just as communism was collapsing and new democratic freedoms allowed Jews to reassert and reclaim their identity and forge a new beginning in what before the Holocaust had been Europe's Jewish heartland.

Under communism in most countries in the region, the practice of Judaism and the expression of Jewishness were semi-clandestine, almost secret, almost taboo.

Leaders of the remnant Jewish communities in these countries were beholden to the regime and generally toed the party line. Less than a year after the fall of communism, the rabbi in Prague was forced to resign after admitting that he had been a police informer under the communists.

All communist states except Romania had broken ties with Israel after the Six-Day War in 1967. And in most countries Jewish practice and education, even the study of Hebrew, was strictly limited or even barred.

In Prague, for example, the scholarly publication of what was then the State Jewish Museum was published in English and French and other languages -- but not in Czech, in order to limit access by local people.

And many Jews I interviewed were unwilling to speak to me on the record, even on a subject such as the restoration of a monument to victims of the Holocaust.

"We had to get authorization from the authorities to speak with foreign visitors, and then afterward we had to write out reports on our conversations, whether it be with visiting scholars, journalists or whatever," a Prague Jewish museum curator told me in 1990. "It was the pressure of a totalitarian regime."

In Warsaw in the early 1980s, I was part of a group called the Jewish Flying University that consisted of young Jews and non-Jews who tried to teach themselves -- on their own -- Jewish ritual, tradition, history and culture. The group "flew" from apartment to apartment for meetings.

Western Jews like myself were conduits to the outside world, despite the limits of our knowledge.

"You're a real Jew," they told me, even though I don't keep kosher, go to services much or speak Hebrew. "You've known all your life that you are Jewish."

November 1989 saw a climax of change in Eastern Europe that had been coming for months.

Already that summer a negotiated settlement in Poland had led to free elections. And in September, the American Jewish Joint Distribution Committee had officially returned to Hungary after 36 years, and Hungary and Israel had resumed formal diplomatic relations.

Nov. 12 of that year found me in Prague sitting with a small group of eager yet anxious Jews in the top floor function room of the historic Jewish Town Hall. The Berlin Wall had come down three days earlier, but the Velvet Revolution that ousted the communist regime in Prague was still five days away.

We were there to meet with Edgar Bronfman, then president of the World Jewish Congress, who was making his first official visit to the country.

I saw fear and hope -- and also excitement -- on people's faces.

"The winds of freedom are blowing across the world like a gale," Bronfman declared. "I don't like to use the word 'democracy,' but prefer to say that there is a new era dawning on everyone that people won't be governed without their consent."

He went on, "It is important that the Jewish people in Eastern Europe are beginning to feel closer together. It is heartbreakingly sad that there are so few Jews left, [but] the Jewish world will go from strength to strength. We have a mission -- to teach others the way of the Lord."

Bronfman concluded: "Freedom is blowing, blowing for all of us."

It was an emotional moment at the cusp of the unknown: If the past is a foreign country, so is the future.

Read story at JTA.org
Posted by Ruth at 11:16 AM No comments: Links to this post

This blog includes links to my JTA column, "Ruthless Cosmopolitan" as well as to other articles I write in various media. I also will be throwing in occasional insights, observations and adventures.....

Ruth
I'm an American writer, photographer, and public speaker long based in Europe. I've chronicled Jewish cultural developments and other contemporary European Jewish issues for more than 20 years and currently coordinate the web site www.jewish-heritage-europe.eu. My latest books are "National Geographic Jewish Heritage Travel: A Guide to Eastern Europe," published in 2007, and "Letters from Europe (and Elsewhere)," published in 2008. I also am working on "Sturm, Twang and Sauerkraut Cowboys: Imaginary Wild Wests in Contemporary Europe," an exploration of the American West in the European imagination for which I won a 2006 Guggenheim Fellowship and an NEH summer stipend grant. In 2015 I was the Distinguished Visiting Chair in Jewish Studies at the College of Charleston, SC.